A module is a collection of Go packages stored in a file tree with a go.mod file at its root, Migrating to Go Modules Tutorial 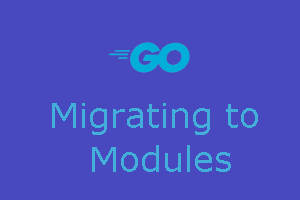 How to migrate my go project in Go Modules Project?

Go projects use a wide variety of dependency management strategies. Vendoring tools such as dep and glide are popular, but they have wide differences in behavior and don’t always work well together. Some projects store their entire GOPATH directory in a single Git repository. Others simply rely on go get and expect fairly recent versions of dependencies to be installed in GOPATH.

Go’s module system, introduced in Go 1.11, provides an official dependency management solution built into the go command. This article describes tools and techniques for converting a project to modules.

Please note: if your project is already tagged at v2.0.0 or higher, you will need to update your module path when you add a go.mod file. We’ll explain how to do that without breaking your users in a future article focused on v2 and beyond.

Migrating to Go modules in your project

A project might be in one of three states when beginning the transition to Go modules:

With a dependency manager

go mod init creates a new go.mod file and automatically imports dependencies from Godeps.json, Gopkg.lock, or a number of other supported formats. The argument to go mod init is the module path, the location where the module may be found.

This is a good time to pause and run go build ./… and go test ./… before continuing. Later steps may modify your go.mod file, so if you prefer to take an iterative approach, this is the closest your go.mod file will be to your pre-modules dependency specification.

Without a dependency manager

Without a configuration file from a previous dependency manager, go mod init will create a go.mod file with only the module and go directives. In this example, we set the module path to golang.org/x/blog because that is its custom import path. Users may import packages with this path, and we must be careful not to change it.

Converting to Go modules should be a straightforward process for most users. Occasional issues may arise due to non-canonical import paths or breaking changes within a dependency. Future posts will explore publishing new versions, v2 and beyond, and ways to debug strange situations.